This famous monastery is one of the classic sights of Bangkok given its beauty and uniqueness, which is why it is often used as the main tourist attraction when promoting the city.
Located on the banks of the Chao Phraya River, Rattanakosin district, its skyline is unmistakable.

From its central prang, Wat Arun affords a panoramic view of the city, another reason to include it in your itinerary, together with the Grand Palace and Wat Pho.

To access the temple you have to take a Chao Phraya Express or a shuttle boat on the opposite shore.

Wat Arun is a Buddhist temple of magnificent beauty and also a challenge for those suffering from vertigo.
With its stylish outline and the reflection of light on the ceramics that decorate it, it can be distinguished from far away on the Chao Praya River at the edge of Thonburi.

The complex has a monastery that existed in the times of Ayutthaya but what is most interesting is the set of architectural structures called prang.
Prang are constructions, religious towers, that reproduced the distinctive design of Khmer architecture in Angkor, from where the style was imported. 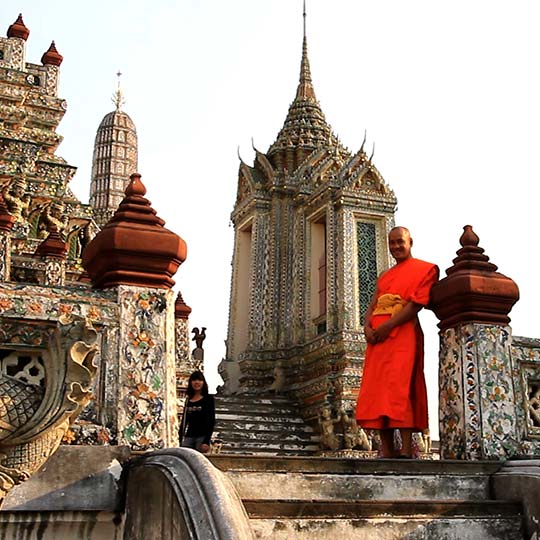 Initially, they depicted the sacred Mount Meru, the symbolic centre of the Hindu universe. Standing opposite a bell-shaped stupa, the prang is more like a cucumber in shape (that said with all due respect) or, sometimes, an ear of corn.
There are four of them, one in each corner, as well as another one in the centre.
This is a further example of the continuous influence of Indian culture in south-eastern Asia.

Within Buddhist symbolism, it has changed its meaning and is no longer the residence of Shiva or Vishnu.

In Wat Arun, the central prang has three levels – the ground level represents the world of existence ruled by the confusion of appearance, the middle level represents a world in which desires are extinguished, and finally, the uppermost level symbolises the new dimension when eternal happiness is achieved.

The central tower rises to 79 m in height and the view of the city from the medium level open to the public is exceptional. The climb and the fact that the visit is outdoors mean that it is advisable to avoid the midday heat and plan your trip for the early morning just after it opens to the public or else nearer sunset before it closes (around 4 pm).

In the visit do not miss the beautiful ubosot, next to the prangs.

Summary
Article Name
The lovely Wat Arun
Description
Wat Arun, splendid! underline this temple in your visit program in Bangkok. We tell you why here, with practical information, suggestions and a video so you can prepare an exciting visit to Bangkok.
Author
Manuel Francisco Jalón
Publisher Name
Manuel Francisco Jalón