For 417 years, with one brief interruption, the city of Ayutthaya took over from Sukhothai as the capital of the Kingdom of Siam, a brilliant period in its history based on growing rice and trade.

Ayutthaya Historical Park is 76 km north of Bangkok, next to the Chao Phraya riverbed.

As a reference, the distance between the Pasak River in the east of the city and the Chao Phraya River in the west is approximately 4 km or 2.5 miles.

Does Ayutthaya deserve a visit?

Part of the Unesco world heritage, the visit will mainly include Buddhist monasteries, therefore it is especially recommended for those who enjoy the knowledge of the history of this country and Buddhist monuments.

When to go to Ayutthaya?

At any time of the year.

This excursion can be done perfectly on your own. One day is enough.
Another interesting option is to return to Bangkok by sailing the Chao Phraya River while enjoying a buffet lunch and the scenery.

Can it be combined with other destinations?

It is best to spend at least one full day in Ayutthaya, nonetheless, if not possible it can be combined with the Damnoen Saduak floating market and the Mae Klong train market.

We suggest the following tour only if lack of time does not allow you to spend two days on these visits.

The city was founded in 1.350 by the first king of the U-Thong dynasty, who called himself King Ramathibodi.

The city’s strategic location and the construction of drainage channels inside made it almost impregnable and the monarchy, together with Theravada Buddhism, contributed to prolonging a period of stability and splendour.

At the beginning of the 14th century, there were two important enclaves to the south of Sukhothai, Lavo and Suphannaphum, which were located on either side of the Chao Phraya River.
An increasing population and seafaring trade led the local governors to establish a new city close to the ocean as a meeting point for the region’s network of waterways. 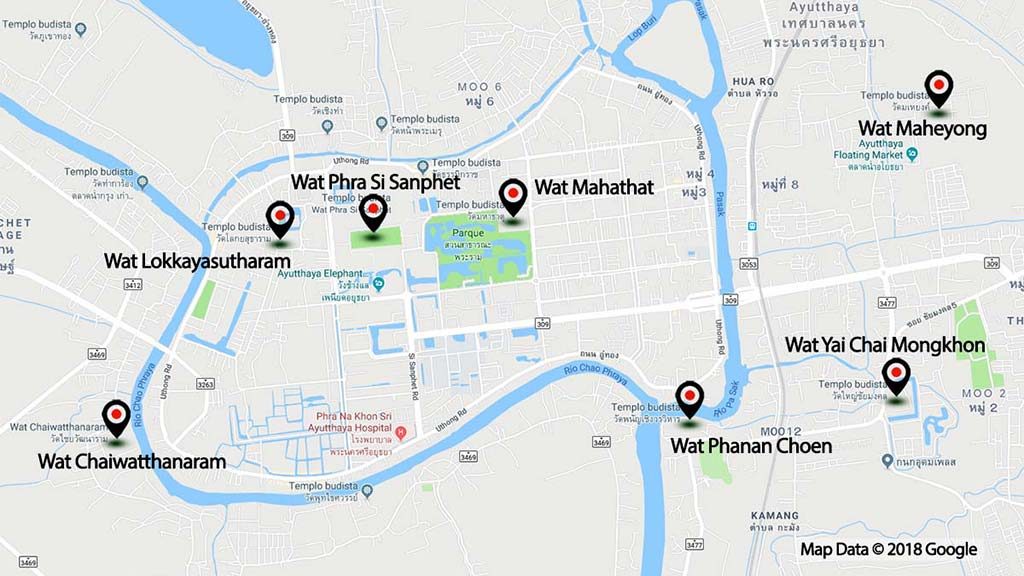 The city is surrounded by three rivers – the Lopburi, Pasak and Chao Phraya – which create an island that gives the town a truly strategic position. During the wet season the land surrounding the city flood. This fact increases the fertility of the local rice fields, but it has also prevented enemies from holding prolonged sieges of the city.

This led King Naresuan the Great to change the city’s original name from Ayodhya, the birthplace of King Rama, the hero of the epic Ramayana, to Ayutthaya, which means ‘the invincible city’.
From the 14th century onwards, the city’s prosperity meant that it became the new seat of political power in the region.

Asian and European travellers considered this kingdom to be one of the wealthiest and most progressive regions in the world. Following four centuries that saw the reigns of 33 kings from seven different dynasties, in 1767 the Burmese army toppled the city’s defenders, bringing about a huge human tragedy. It proved to be an irreversible blow for the city’s cultural heritage.

When visiting the ancient capital of the Kingdom of Siam, we should remember that the city was devastated by these events: what we can see today are mainly the foundations of many noble buildings together with restored stupas and prangs and images of the Buddha.

To understand the full splendour of the city, think that when the Portuguese and other delegations of the world powers of the time arrived, there were hundreds of tiny boats sailing alongside the European galleons moored in the city harbours.
Numerous royal palaces and religious temples in all their glory, just like those we can still find today in Bangkok’s Grand Palace and the temple of Wat Pho.

During this period of history, Buddhism consolidated its position as the country’s national religion. Many of its rulers were avid followers of Theravada Buddhism, constructing monasteries and spreading their beliefs throughout the land.
An excellent example of the architectural style of this period is the chedis or bell-shaped reliquaries inspired by the art of Sri Lanka, and prangs.

Schedules for transfers by train

Keep in mind that the price is very low except for the Special Express at 08h30.
To update the trains, prices and see combinations with the Bang Pa-In Summer Palace, check this website.

It was established in 1630 by King Prasat Thon and only fell into disuse after the disaster of Ayutthaya in 1767. Later it had a new flowering to be renovated by King Mongkut and his son King Chulalongkorn, both known in the West through the movie of Anna and the King of Siam. Father and son, of whom Anna Leonowens was a teacher of English.

The palace has magnificent gardens and buildings of different styles, from traditional Chinese architecture to modern neoclassical buildings. It is a very refreshing visit as it is very different from the set of historical places in Ayutthaya and this contrast is appreciated.

Chulalongkorn’s first wife, Queen Sunanda Kumariratana, died at the age of 20 with her daughter during a shipwreck on May 31, 1880. Until then no one could touch the royal family, so they could not be rescued. You can see a memorial that was built in their honour inside the palace.

In 1932 the absolute monarchy of Siam was transformed into a constitutional monarchy by a bloodless coup. It is also true that since then the military has remarkable power in the country.

By the way, the story told by Anna Leonowens has no historical references, so it was the result of her imagination and a bit of plagiarism, with a commercial purpose.
Although she was actually in court for five years, she barely projected her influence on the royal family. In fact, she only shows up in an appendix to a shopping list, as a written reference.

The most important of these temples, constructed in the 14th century on the orders of King Borommarachathirat I, is that of Wat Maha That, a religious centre symbolising the universe. This temple was also the residence of the Buddhist “patriarch” or Sangharaja, and relics of the Buddha were found inside a prang here.

For many centuries, the monarchy was a force for social cohesion: the king was the supreme political and administrative leader, a sacred being at the heart of the city’s spirituality, but the monarchy was also at the source of its decline. Following a period of stability and order, the struggles for succession between different warring factions eventually weakened the kingdom and were one of the causes of its defeat at the hands of the Burmese.

The image of the head of the Buddha trapped between the roots of one of the temple’s trees is a famous one. Perhaps it ended up there following a failed robbery, or maybe it is merely the result of the passage of time as the city sank into ruins.

The monastery of Si Sanphet was constructed in the 15th century on a site previously belonging to the grounds of the royal residence. However, no community of monks lived in the monastery, and its use was restricted to royal ceremonies to earn merit.
The temple’s stupas contain relics of several kings, and even, it is believed, of the Buddha.

South of the city, near the River Pasak, is the Wat Phanan Choeng, a temple that was built in 1324 – before the city was founded. The building houses one of the most beautiful and highly prized images of the Buddha, which stands more than 14 metres tall.
The legend goes that the statue’s eyes dropped tears the day the capital fell.
The Chinese call the image Sam Po Kong, which means ‘good luck on your voyage’. Their interest in the temple stems from the fact that this statue was partially restored by the famous Chinese explorer, Zheng He.

Wat Yai Chai Mongkol, located in the south-east of the city, was erected by King U-Thong in the mid-14th century to be used by a community of monks on their return from a study trip to Ceylon. Later, King Naresuan added a great stupa to commemorate his victory over the Burmese army.
The stupa is more than 62 metres tall and was constructed with 28,144 tonnes of brick.

It is interesting to note that over the course of its history princes and kings visited this temple on various occasions, hoping to find out what their future held, auspicious or disturbing.

The monastery of Maheyong was constructed between the 14th and 15th centuries, although experts argue over its origins. Its main stupa is bell-shaped. Many Buddhist come to its ancient vihan in order to meditate in this sacred place, which should be visited in silence to preserve its serene, welcoming ambience.

Other sites of interest in Ayutthaya Historical Park.